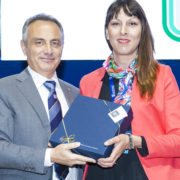 On Monday, May 27th 2019, Davide Maternini SPA had the honor of being awarded a prize during the General Assembly of the Industrial Union of the Province of Varese.

Our business reality has been rewarded for the 40 years association with the Union out of 72 of company history.

It was a pleasure taking part in this ceremony which involved over than 30 companies of the province, with the hope that many more years of cooperation will follow.

In this regard, we invite you to take a look at the opening video of the Assembly (only in Italian).

Prize given by the outgoing President of Industrial Union, Riccardo Comerio